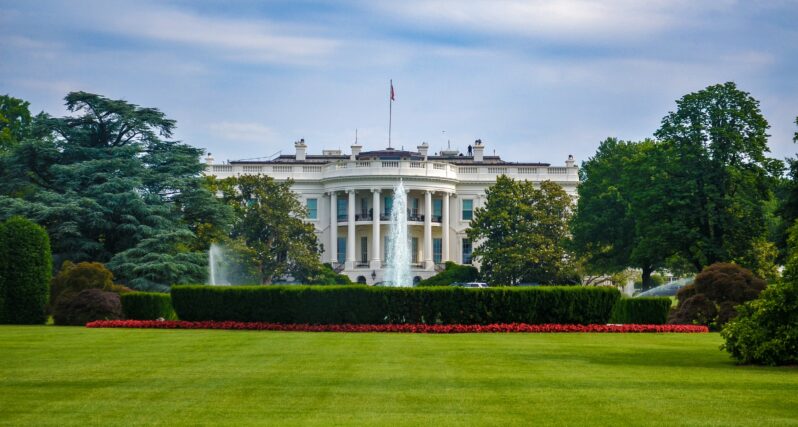 By Steve Weber and Ben Williams

One of us recently got a COVID vaccine at the Oakland Coliseum in Northern California. It was a triumph of massive logistics on a scale that few Americans outside of the military ever get to see first-hand. A line of cars more than a mile long moved forward at a steady clip, guided by hundreds of personnel from FEMA, CalFire, the National Guard, and local police forces. The needle hit my arm less than 5 minutes after my appointment time. Record keeping was flawless, and the mood was professional and friendly. When I asked how many vaccines were given that single day at that single location, the answer was ‘somewhere around 16,000.’ That’s roughly 26 shots a minute. And the same thing is happening at hundreds of mass vaccination sites across the country.

This story is a tangible example of President Biden’s apparent mindset and strategy. Biden entered office just about 3 months ago with a mandate to clean up a series of messes handed to him by the previous administration and reinvigorate American society and the economy. Rolling out the vaccine to as many Americans as quickly as possible was the number one agenda item. The question was, what else would happen in the first 100 days?

A 78-year-old DC insider, Biden wasn’t generally expected to be a transformational President. Beyond the bold vaccine rollout plans, he could have opted for a moderate, restorative approach that would gently prod an economy that was gradually recovering, along with a message of social reconciliation and a toning down of culture wars, Sino-American conflict, and overall partisanship. “Healing and unity” might have been enough.

He has, instead, chosen a historically bolder path. Biden and the Democrats are building on the pandemic response to place a generational bet that they can demonstrate what massive and audacious government action is capable of, and fundamentally change the narrative surrounding government efficacy.

If the bet pays out, Democrats may have paved the way for an unprecedented era of goodwill toward government that could catapult progressive policy priorities based in a similar model of spending and intervention to the top of the national conversation. It’s clear Biden has history and precedents like the New Deal and Great Society programs on his mind. But if the bet fails, it will likely be decades until another opportunity comes around, and Ronald Reagan’s famous quip that the most frightening words in the English language are ‘I’m from the government and I’m here to help’ will seem fully vindicated. This is a major fork in the road of American politics, and how it plays out will significantly impact both parties (though differently).

With that in mind, let’s go back to the vaccine. During the summer and fall of 2020 Biden campaigned on a promise to get a vaccine in every arm and rescue American families, businesses, and the economy from the depths of the pandemic. In just his first 60 days as president, his administration won big on the bet that it could do just that with a model based on private sector innovation along with big government logistics and funding. Already, the administration has: far surpassed the milestone of administering 100 million vaccine doses (and rapidly approaching 200 million), a feat originally estimated to take at least 100 days; negotiated an unprecedented agreement between two major pharmaceutical companies, Johnson & Johnson and Merck, to jointly produce the J&J vaccine, and, in doing so, scaled vaccine production capacity to the point of having more than enough doses to vaccinate all U.S. adults by the end of May; and passed a record $1.9 trillion relief bill to support individuals, businesses and municipalities.

The successful vaccine rollout and stimulus with bipartisan support from voters (not legislators) has ushered in high approval ratings and a moment of goodwill toward government that creates an opportunity to argue for additional big government bets going forward. And that is exactly what is happening. The administration is already doubling-down, with multi-trillion dollar infrastructure and investment bills on the table (along with tax increases to make up only some proportion of the additional spending).

Winning the Bet, Managing the Reaction and Owning the Narrative

The bond markets are — understandably — a little nervous about potential consequences for longer term inflation. But at least right now, the so-called bond vigilantes seem willing to give Biden most of the benefit of the doubt, and 10-year Treasuries are trading at about the same level as in January of 2020, when basically no one was expecting a return of inflation.

This is as much social-psychological phenomenon as it is a rational economic one. There is simply no way to know at present if this vast infusion of newly created money and government debt will cause long term inflation to rise, or not. What happens over the long term depends first and foremost on the degree to which these new dollars drive increased productivity across the economy, which is a function not only of the ways in which the money is allocated and spent, but also a question of how technology is developed and deployed. It’s far too soon to tell, and it will likely take years and perhaps even a decade before the results are truly known.

That means that how the Democrats manage public expectations through politics and storytelling now is the most important determinant of whether they even get a chance to prove out their bet. To a considerable extent, inflation becomes a self-fulfilling prophecy when people expect it, when markets start to believe it and when businesses and households change what they do on the basis of those beliefs about the future. Economists call this ‘rational expectations’ behavior, but for political communicators, it simply emphasizes the importance of owning the narrative. For the Democrat’s generational bet to have a chance of paying off, they simply must control the narrative and convince voters and markets that they can and should expect success.

Here are two critical stories Democrats must get right over the next year or so:

First, Democrats should take appropriate credit for what has been a historically successful, mass scale government program, while avoiding chest thumping and accusations of politicizing the pandemic. That means focusing the narrative on the people and partnerships on the front-lines — scientists, first responders, essential workers, FEMA and other crews manning the vaccination centers. Government was an enabler and politicians made some good decisions, but these people were the reason for success. That’s a formula that can be repeated, with an emphasis on the humanity, civility, and equity ingredients that come along with it.

Second, Democrats need to capture the logic of systemic crises, inevitable surprises, and the power of public-private partnerships to respond — and do so without catastrophizing daily life. It’s important to keep in the forefront of Americans’ minds the fact that the pandemic was not unpredictable – virologists, public health officials, and business scenario planners had foreseen that COVID 19, or something very much like, it was almost certain to happen at some point soon for at least 2 decades. This wasn’t a failure of imagination, as the 9-11 Commission put it regarding that crisis. It was a failure to act on foresight and prepare adequately for an almost inevitable event that was a relatively low probability in any specific year, but a substantial probability over several years. In other words, we could have been better prepared before the pandemic hit, and using the lessons learned and the model of big government intervention and leveraged public-private partnerships, we can be prepared for future inevitable surprises.

Doubling Down to Address Future Crises

Take a casual look around you and count the number of analogous inevitable surprises that will probably emerge over the next decade. Everyone will have their own list, but cyber and climate are the two most obvious to us right now. Here’s a safe prediction: There will be a cyberattack of systemic importance that destroys irreplaceable data, shuts down critical public and private services, and does significant physical damage to property and people. And there will be climate shocks that shut down utility grids, damage major cities, undermine infrastructure, and cause significant loss of life. Indeed, both crisis scenarios have already happened at moderate scale, and the underlying forces driving them are increasing in intensity.

Strictly market-based responses and solutions don’t deal well with these kinds of long-burn inevitable crises where specifics and timing are impossible to foresee. If you doubt that assertion, just look at the under-developed state of cybersecurity technology and practice and the cyber-insurance market. This is a real opportunity for the administration because most moderate Republicans also recognize, at least conceptually, the need for government action in situations like this where markets fail.

Success in answering these inevitable surprises with strong government programs once again goes back to effectively telling the story and generalizing the lessons of the pandemic that are still fresh to make the case for a similar model to address future scenarios.

There are opportunities here for both parties: it’s about how the lessons of the pandemic highlight just how successful public-private partnerships and government leverage – like the Trump administration’s vaccine pre-purchasing program and the Biden administration’s vaccine logistics and distribution regime – were to solving a major crisis. The narrative also hinges on government’s unique ability to ‘fill in where markets fail’ in a way that helps compensate for the destructive inequities that market-driven solutions tend to reveal. In the same way that the pandemic continues to reveal tangible inequalities in access to care, employment, and more, future inevitable surprises will do the same. Government-driven solutions are equipped to answer crises in a much more equitable way than partial market solutions, which will continue to benefit those with means.

The COVID response tells us that Americans have a certain appetite for government intervention, and in some circumstances, it may be bigger than we thought. But we know it is not infinite. Higher stake bets on big government face a major partisan hurdle from the outset, but it does not have to become a fully partisan fight. What is essential is that the narrative also outline in explicit terms how the government will eventually withdraw and allow market forces to take over once the initial crisis response has achieved its goals.

Support, even for successful interventions, will break down over time if government is seen as consistently getting bigger, taking advantage of crises to grab hold of more authority without fading into the background and allowing natural order to return once things stabilize. This last element is probably the most important and challenging one for Democrats to operationalize and explain. So far, the administration has not suggested an exit strategy for its current COVID-related interventions. When, and how, the government pulls back and allows the private sector to take over future decisions on topics like mask-wearing and vaccines will be a critical part of the pandemic’s narrative and will help assure Americans that future big government bets can solve big problems the right way, without creating permanent government control.