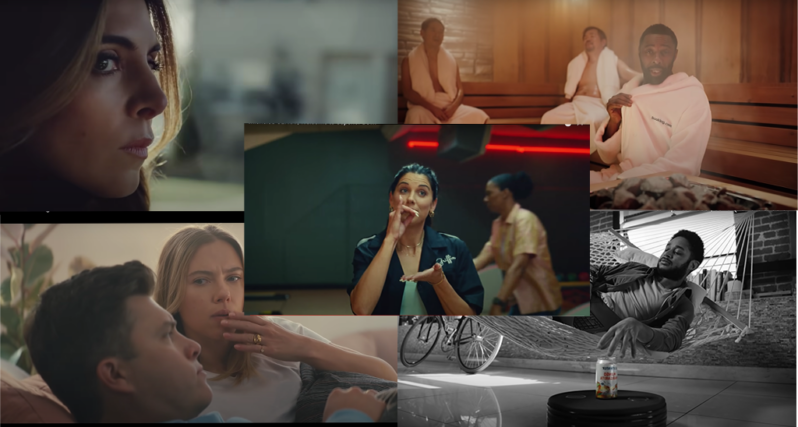 Whether or not you thought Super Bowl LVI had the drama and flare appropriate for its Hollywood setting, the famously expensive ads certainly brought the star power. Maybe it’s just us, but the spots this year felt as if they leaned toward the use of celebrity surrogates over the message even more so than usual. Sometimes effective, sometimes not.

After what’s felt like a lifetime of polarization, struggle, and COVID exhaustion, nostalgia was featured heavily this year, with brands promising a fruitful and exciting future by reminding us of the good times we remember from years past. The classic Budweiser Clydesdale returned after a year off and late 90’s and early aughts Hollywood was featured in spots that remined us of the rewatch-ability and staying power of classics like The Sopranos, The Big Lebowski, and Austin Powers. Even something as simple as a callback to a bouncing screensaver and the more modern use of a QR code drew enough interest and traffic to temporarily overwhelm the Coinbase app.

Love them or hate them, there’s no doubt Super Bowl ads are an effective (and expensive) way to get brand attention. Here are six favorites from the BWS team:

Lots of nostalgia and relatively little edge or risk this year, which perhaps represents a sense of collective pandemic exhaustion and economic uncertainty about what comes next. But… the number of electric car ads really stood out to me  — seems like the mental and emotional transition to electric cars is essentially complete, all that remains is to turn over the fleet. In that context, the BMW ad was clever and fun and certainly out of character for BMW, a welcome change from the overly serious ‘ultimate driving machine’ narrative. But my favorite, of course, was Meadow Soprano driving her electric Silverado through the Lincoln tunnel, the Jersey Turnpike, and Tony’s old haunts. That’s a kind of nostalgia I can get behind.

Maybe it’s because I enjoyed the simplicity compared to the high production value and ensemble-casts of many of the other ads this year, or maybe it’s because I’m a sucker for self-deprecating humor, but the simple Booking.com ad made me laugh. Like its name, in the simplest way, the Booking.com spot lets you know exactly what it does, how you can use it, and why you should go book a vacation. That’s clear, concise messaging in a nutshell.

It’s a pretty rare occasion that I actually laugh out loud at an ad. I might crack a smile or even a small chuckle at something cute or kitschy, but Amazon’s “Mind Reader” ad staring real-life couple Colin Jost and Scarlett Johansson got a genuine laugh out of me. Not only that, but the company took a risk that I think paid off: they leaned into the opinion held by many that the convenience of Alexa is offset by an invasion of privacy, as Alexa exposes Jost and Johansson’s inner thoughts to each other at inopportune times. While privacy concerns in the tech industry are real, it was refreshing to see Amazon use this platform in a lighthearted way, rather than making a reputation play with a more serious ad. I wasn’t sure how Amazon could follow their 2021 Michael B. Jordan Super Bowl ad, but they seem to be on a winning streak!

Placing some of the country’s elite athletes in a bowling alley together – taking it extremely seriously – is already a clever move. Most Americans are familiar with the sound of aerosol cans spraying used bowling shoes or the Steve Buscemi-like person checking you in and hardly think about Jimmy Butler or Alex Morgan having that same experience. Naturally adding in the element of respect the female athletes deserve, as if it has been there forever in sports, while still in a bowling alley makes representation, something that can so often be stigmatized or presented as a burden, look so easy and authentically fun. Cheers to Michelob Ultra to standing out in a crowded space and recognizing female athletes in a way that they always have deserved to be recognized.

Not many ads made me laugh this year but Cutwater Spirits’ commercial definitely made me chuckle. There were no crazy graphics or big name celebrities, just regular people finding cheat codes for daily life experiences. Lazy people are the ones who redefine rules and make the most out of their time. Cutwater makes a brilliant connection between their product, bar cocktails in a can, with laziness because everyone loves convenience. You don’t have to sit at a bar or buy your own ingredients to have a cocktail when you can just pull a can out of your fridge! Personally, I never heard of this product before—I can’t wait to try it!

As many others have noted, this Super Bowl felt like a generational torch-passing. The halftime show featured hip hop icons of the 90’s and early Aughts. The ads celebrated the sensibilities of Gen X and older Millennials (I see you, Meta, with the Chuck-E-Cheese reference triggering memories of birthday parties past). Even the coaches came from our generational cohort. So it’s only fitting that the funniest (and in my opinion best) ad of the night featured Seth Rogan and Paul Rudd, two actors whose filmography maps to our generation’s journey from adolescence (SuperBad) to extended adolescence (Forty Year Old Virgin) to our unique style of adulthood and parenthood (Knocked Up, This is Forty).