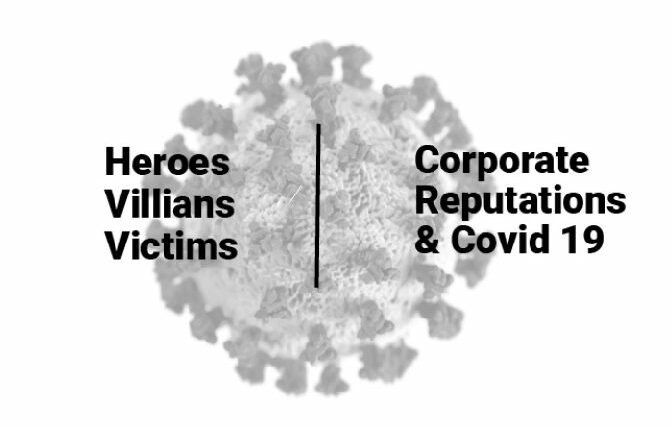 Over the past days, our firm has spent a lot of time talking to clients who – like businesses around the world – are hunkering down and working through a series of difficult decisions related to the COVID-19 epidemic. The lion’s share of focus right now must be on the most immediate and practical decisions that have to be made – should workers be ordered to work from home, or be allowed, encouraged or required to show up in person? Should operations continue on a business-as-usual basis, or are cancellations, reductions or other contingencies required?

As companies make these decisions, it would be understandable if their primary concern was simply self-preservation. In the face of a stock market rout, darkening economic prospects and vast uncertainty about what the future holds, corporate executives could be forgiven for thinking that public perceptions must take a back seat to the survival instinct.

But we are urging our clients to take a broader view. Here’s why.

Crises from the Great Recession of 2008-9, to the post-9/11 environment and further back to the dot.com bust teach us that inevitably there will emerge from this moment corporate Heroes, Villains and Victims, and that the reputation that attaches to a company in such moments can last for a long time to come. Ask the leaders of Wall St whether their reputations have yet fully recovered from the financial crisis of over a decade ago. Or the auto leaders of Detroit who still to this day are reminded of how their predecessors came to Washington, DC in private jets to ask for a taxpayer funded bailout.

Conversely, companies like Walmart and Anheuser-Busch will tell you that the work they do to help communities after hurricanes and other natural disasters yield them reputational benefits that meaningfully impact their businesses – from customers who are more loyal, to employees who are more dedicated to the corporate mission, to elected officials and regulators who are more willing to give the companies the benefit of the doubt.

So who will be the Villains, Heroes and Victims of our current crisis?

Unlike the Financial Crisis, no company can be blamed for having created COVID-19. But almost certainly some companies will do things in the coming weeks that earns the ire of the media and public. Most likely, they will fall into one of these buckets.

The Hypocrites. Any company that treats its senior-most leaders one way and everyone else including lower ranking employees or customers another way will be cast into this bucket. So, too, will those who seek special favors from the government while at the same time imposing hardships on customers or workers. Already, there are anecdotes about some financial services companies in New York City redirecting their top people to facilities in the suburbs, while the main body of the workforce is required to continue showing up in Manhattan. Public judgment will be swift and harsh if any of those workers wind up getting infected, while their bosses continue to work at a safe distance. Same goes for any company or industry that may be seeking bailouts from Washington, while stiffing customers or workers.

The Profiteers. Companies that create even the appearance of seeking excess profits from the crisis will be raked over the coals. Already, questions are being lobbed at retailers about the price of Purell. This will only mount as pressures build up for scarce goods and services.

The Reckless Idiots. The company that fails to heed a public health warning, or whose leadership behaves with gross irresponsibility and, in doing so, puts their workers, customers or communities at risk will not be easily forgiven. Airlines, operators of major tourist attraction and the major sports leagues could all wind up in this category if word gets out that their decisions to hold or cancel events are being driven by anything other than adherence to the best available scientific guidance.

The Unprepared. Companies that should have been ready to handle this type of emergency, but are not, will face a tough reckoning. Nowhere is this risk greater than in the health care sector. Public hospitals that may be under-resourced can blame lack of adequate funding, but privately owned (particularly private equity owned) facilities will have a hard time explaining to the public why they are lacking in personnel, equipment or sufficiently robust contingency plans.

So much for the Villains. What about the Heroes?

Some potential Heroes are obvious. The pharmaceutical company that brings a vaccine to market will be lauded for generations. The health care workers who put themselves at risk for others will be rightly celebrated by a grateful nation (we should start thanking them for their service right now). But a company doesn’t have to bring the miracle cure to be a hero. Consider the following more attainable aspirations.

Put Stakeholder Interest First. Any decision, big or small, that sacrifices profits for the benefit of workers, customers and communities will be well received. Uber just announced that any driver who is required to quarantine will be paid for those weeks. That may wind up costing them a lot of money. But that short-term hit will pale in comparison to the reputational harm the company would have suffered had Uber allowed its drivers to suffer severe economic harm at a time when the company was already moving to provide sick-leave benefits for its full-time employees and executives.

Leverage Core Capabilities. CVS recently announced that it would waive fees on prescription drug home delivery. This move does so many important things. First, it shows the company putting the interests of its customers first. But it’s also showcasing the company’s unique ability to provide this valuable service to customers around the country. For a company that faced a grueling antitrust battle recently, this is a demonstration of the public value of their scale, which they will be able to point to any time a critic accuses them of being “too big.”

Serve Those Who Serve. As mentioned above, the real heroes of this situation will be the doctors, nurses, first responders, and everyone else in the health care system who will be called upon to put themselves at risk to keep the rest of us healthy and safe. The companies that employ those people are in the first position to celebrate them and take steps to demonstrate gratitude and support. But really, any company with a checkbook can make a contribution here. These frontline workers will need support for their families, some will need financial support if they fall ill, and, tragically, some may die in the line of duty and their families will need to be cared for. Every American company can step up and do something for those who will get us through this crisis.

Lead. The actions described above are available to any company. But there is a smaller group of companies – the largest and most influential businesses in the U.S. – who have an opportunity to truly lead. Large corporations have unique resources and ability to distribute messages to the public at scale, to harness significant sums of money quickly and to mobilize their employees and customers. While it may be far-fetched, one could certainly imagine companies like Disney, JPMorgan Chase, McDonalds, Apple, Google, General Motors and others coming together to fund a nationwide effort to support those most directly impacted by this emergency.

That could mean dollars for local public health agencies in underserved communities, or for food banks in areas where widespread quarantines are required. To be sure, this won’t be an easy step for these companies, all of which have seen their stock prices drop since the crisis began and will have plenty to do to shore up their own positions. But corporations of their scale and sophistication can undertake a lot simultaneously. They will reap meaningful long-term rewards if they lift their eyes and seek ways to reassure a frightened nation that we will get through this together.

Over the past several years, the world’s business leaders have said a lot about the need for corporations to “save capitalism” by showing the public how the existing economic system could serve the public interest. We now stand before a golden opportunity to do just that.

If big business jumps into the breach, going above and beyond to serve their workers, customers and communities, even at the expense of near-term profits, they can fundamentally change the downward trajectory of public confidence in existing system. If they fail to do so, public trust – already stretched thin – could snap.

This is a historic moment. Corporate America: step up.

For any business leaders or consultants reading this, here are some questions you might ask yourself/your client:

–      Are we meeting the minimum threshold of responsible practice? Are our day-to-day operational and strategic decisions being informed first and foremost by concern for the welfare of our workers, customers and communities rather than consideration of near-term profitability?

–      Are we putting our core capabilities to work for the greater good? What unique strengths have we been telling the world we have that can now be activated for the benefit of the wider public?

–      Are we doing anything for the real heroes of this crisis – the health care workers, public health officials and first responders who are already sacrificing and will clearly be called to sacrifice so much more in the weeks and months to come? If not, what can we start doing now?

–      Is there anything more we can do? What would it mean to bring an “all-of-company” approach to contributing to the public welfare as the nation works through this emergency?