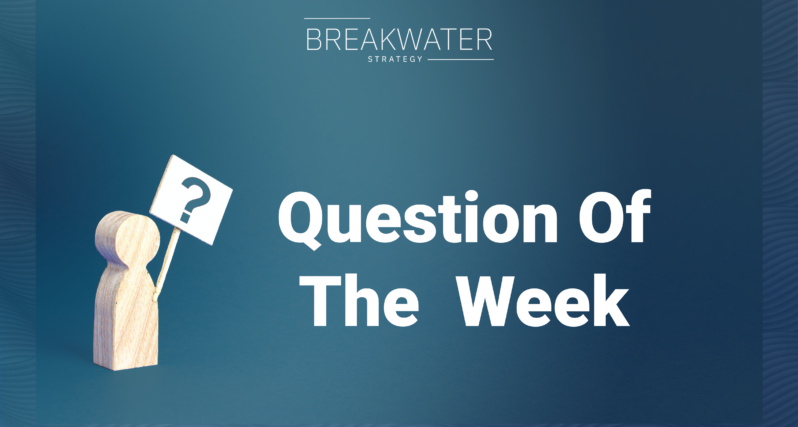 The Breakwater team closes each Monday all-staff meeting with a “Question of the Week” to get the creative juices flowing. QOTWs are posed by team members on a rotating basis and range from prompts on current global issues to the most underrated Halloween candy to imaginary scenarios that call for outside-the-box thinking. Our answers help us get to know one another better and we thought it might do the same for you. We hope you enjoy these snippets and learn more about the people behind Breakwater Strategy.

Question of the Week:

The worst opening sentence of any short story or novel ever written is, as we all know apocryphally, “It was a dark and stormy night” (though I’m not sure anyone ever actually used that line). What is the best opening sentence that you’ve ever encountered or that inspired (or still inspires) you to this day?”

“Twenty miles from here, twenty miles north, the funeral mass was starting. Yale checked his watch as they walked up Belden. He said to Charlie, ‘How empty do you think that church is?” Charlie said, ‘Let’s not care.’” – The Great Believers by Rebecca Makkai

These lines open The Great Believers, a novel by Rebecca Makkai. The novel, set between the 1980s and the present day, explores the public and personal consequences of the AIDS crisis. I find this opening to be particularly striking, as it provides a sense of the intertwining dynamics of tragedy and resilience that have shaped the crisis. To me, the final line underlines a sort of resistance to the prevailing status quo—an approach that can be important when thinking about the inequities of our current moment, such as the COVID-19 pandemic.

“Mother died today. Or maybe it was yesterday, I don’t know.” – The Stranger by Albert Camus

It’s kind of cheating to use Camus’ classic, but I’ve always been struck at how much information these first lines convey with so few words. It’s why there have been entire think pieces dedicated to figuring out if it should be translated to “Maman” instead of Mother due to the slightly different interpretations. Immediately, we can tell that our narrator is unreliable and clearly, something here is a bit off…

“The boy’s name was Santiago. Dusk was falling as the boy arrived with his herd at an abandoned church. The roof had fallen in long ago, and an enormous sycamore had grown on the spot where the sacristy had once stood.” – The Alchemist by Paulo Coehlo

Reading The Alchemist at the beginning of 2022 couldn’t have happened at a better time. My goal for this year is to truly grow personally and professionally. The opening line of this book level sets how to best start a personal journey or begin to pursue a certain goal/dream. My main takeaway: Acknowledge that your current circumstances are just the beginning in a lifetime of growth.

“When I was a kid, my aspirations were simple. I wanted a dog. I wanted a house that had stairs in it–two floors for one family.” – Becoming by Michelle Obama

I have two opening sentences that are my favorite. One comes from my favorite book from high school, Charles Dickens’s A Tale of Two Cities. The famous opening line is one of my favorites since Dickens uses oxymorons to deliver the essence of the book in its first paragraph. Every time I remember the opening line, I am reminded of how enveloped I got when reading.

My second favorite opening sentence comes from Michelle Obama’s memoir Becoming. I remember reading this and thinking “that’s exactly what I wanted as a kid.” Michelle Obama is my biggest aspiration in life and so this opening to her book always brings me a sense of comfort that one day I could be as successful and that I shouldn’t limit myself or my dreams.

“The thousand injuries of Fortunato I had borne as I best could, but when he ventured upon insult I vowed revenge.” – The Cask of Amontillado by Edgar Allen Poe

This opens to one of the darkest and most twisted of Poe’s short stories (and that’s saying something). The narrator (who ends up getting his revenge) is to me the icon of the rationally calculating evil-insane genius, who understands human weakness and exploits Fortunato’s ego perfectly.

I’ve always found evil-insane genius characters to be my favorite in literature, possibly because I never want to meet these people in real life.  And just because the entire first paragraph only adds to the deliciousness of the first sentence, here’s the rest: ‘You, who so well know the nature of my soul, will not suppose, however, that I gave utterance to a threat. At length I would be avenged; this was a point definitively settled — but the very definitiveness with which it was resolved precluded the idea of risk. I must not only punish but punish with impunity. A wrong is unredressed when retribution overtakes its redresser. It is equally unredressed when the avenger fails to make himself felt as such to him who has done the wrong.’